A Man Who Changed The World...Twice

The idea for The Bridge That Tom Built began in a classroom, in my hometown, in Staffordshire, and the person I ought to thank for this show coming into existence is my A-level History teacher, Mrs Belcher. 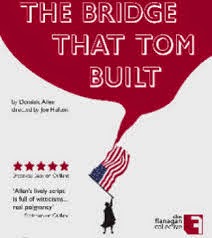 The village I grew up in is largely unremarkable except for being the site of a string of Victorian horse massacres that Arthur Conan Doyle investigated and the boggest of bog-standard Comprehensive schools that was originally built for evacuees during the war. So nothing out of the ordinary. It was a coal-mining town for as long as anyone older than our parents could remember and the school's primary concern had always been to provide more miners. When the mines closed the school's attitude never really changed. The education one expected to receive there was, at best, damage limitation.

But I was lucky. I had some remarkable teachers. Teachers who cared a lot about their students and who knew that if they could make a difference in the lives of their charges, they in turn could begin the world over again. And that's always a remarkable aim in my book.

One particularly remarkable teacher in one particularly remarkable lesson (a primer on Soviet History), asked us if we knew which country had the first political revolution. None of us guessed America. She asked us which came next. France? And then she mentioned a man none of us had ever heard of. Thomas Paine. She said that if anyone in all of history could be said to be her hero, it was him. That he was remarkable. And that, without him, it's doubtful we'd be talking about revolutions at all.

What struck me then was that somebody - a nobody - could come from the boggest of bog-standard backgrounds and, living through the most interesting of times, utterly change the world - not once but twice. And even stranger, that they could then be entirely forgotten. 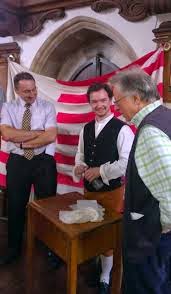 Inspired by a remarkable teacher's admiration of a remarkable man, I read about him, about his life. Here is a man who wasn't afraid of anything. He met more or less every major figure in the eighteenth and early nineteenth centuries. From Oliver Goldsmith to William Blake, from George Washington to Napoleon. And most of them couldn't stand him. Here was a man who wasn't afraid of speaking his mind. A man who was not in the least bit daunted about living in interesting times, times that are every bit as interesting, and despotic, and absurd as they are now. It was then that I knew it was a story I had to tell.

I was asked after the show quite recently what Tom Paine would think of the world today; of David Cameron and Nick Clegg, of Gaza, of the Middle East, of America, of the EU, of banking bonuses, of the newspapers.

I wrote this show not as a testament to some long-forgotten working class hero, nor as a biographical rumination on what it was like in yesteryear. It is a play about being furious. It is about today and last week and the next ten years. That is what is enduring about the life of Thomas Paine. He gave everything - even his own place in the history books - to begin the world over again. That's remarkable.

The Bridge that Tom Built is about having a link to the past so we can understand the present. I cannot pretend it is wholly accurate, or even particularly fair, but it is my journey through Tom Paine's life. It was a journey that made me see the world differently. It was a journey I had to share.

Coming to Norfolk is so important for this show; the journey will bring Tom Paine home. And, above all else, the life of Thomas Paine taught me that no matter how humble your home, it is where all great journeys begin.

And isn't that a remarkable thing?
Posted by The Flanagan Collective at 09:43 No comments: