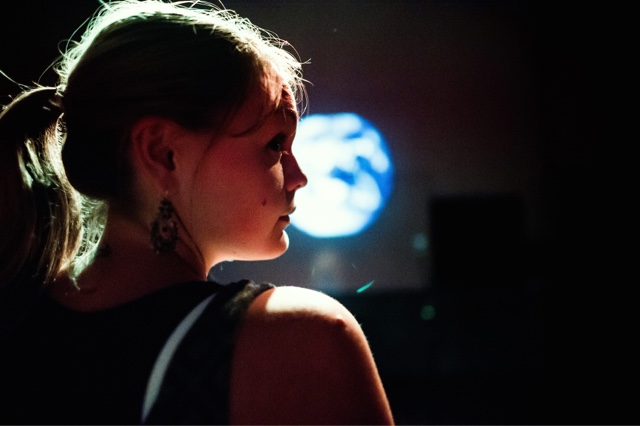 Since 2011 we have been making work in rural North Yorkshire in the UK, before that we were making other work with other folks. With each show we've made we have tried to try harder, to push our ideas further and to create work which simultaneously resonates with our local, regional and national communities - be they geographical or interest based.

We hope, as I'm sure all artists and makers do, that each show we create abstracts something of our world view, prompts a discussion on the here and now and asks things that we don't always think about in our day to day lives. Like hundreds of other independent theatre companies we work hard and keep trying to work harder. We aren't regularly funded and make most work by trying to be as innovative with our business models as we are with our theatre.

And the hard work is starting to get us somewhere. We regularly tour and run work across the UK. In October - with the help of so many wonderful people - we were able to take our show FABLE off-Broadway, to run our show and learn more about the New York arts industry. And right now I am sat typing in The Queens Theatre in Adelaide, where we are running three shows for 5 weeks as part of curated programme at the Adelaide Fringe Festival - the second biggest arts festival in the world.

FABLE has been created over the last year or so. A show about how two people, from very different places, profoundly change each others lives. It was written after a chance encounter with a man called Blair in a pub in the Scottish Highlands. BABYLON started life in 2014 as a show to tour pubs and bars, a response to the growing right wing politics in the UK, and has since toured and played festivals. Now, though, it is a vicious cabaret - as the politics has got harder, so has the show. SHERLOCK is a show we made a few summers ago, playing in York and then touring. It's a new mystery woven from Conan Doyle's much loved stories - a show about the power in humility and the need to find answers ourselves rather than rely on the powers of others.
So three shows which have been created over a number of years and in a few incarnations. We've picked them up, remade them, and flown them over 10,000 miles to Adelaide. Alex, Brian, Joe, Holly, Dom and Wilf; co-producing with Greenwich Theatre in London; presented by Joanne Hartstone in Adelaide. Years of work, months of planning and many many many thousands of pounds.

And more than that, actually, years and years of developing, playing, learning, thinking, making mistakes, making discoveries, meeting people, losing, winning, brain power, body power, being inspired and being down beat and getting more and more innovate as making independent art gets more and more difficult, making news shows, making other shows, returning to old ideas, developing and pushing. All of that, though, goes without saying.

So - a 1* review for BABYLON. This version of BABYLON is bonkers and political and loud and angry and 100% will not be everyone's cup of tea. But here is the first paragraph of our 1* review.

'I’ll preface this review by stating that I don’t think highly of audience participation shows. I think it’s tacky to ask people to pay for a ticket and then expect them to provide a great deal of the entertainment. I’m also tired of Brits who use our Fringe as an opportunity for a cheap holiday in the sun and expect to palm off second-rate entertainment. Now I’ve got that off my chest I’ll get down to business.'

Now, I object to that. It's belittling. Also we don't preface our shows with how hard it was to make, or how expensive it is, or that it costs over £20,000 / $40,000 to run this project. We just do the show we've made. Because that's our job. Our full time, professional job. A huge part of that job is to actively engage an audience - any good piece of art asks an audience to be a part of that, whether actively or passively. For us, actively asking an audience to be part of an experience is hugely important - not because we can't be bothered to do the bits we ask of the audience, but because art is about people, not just about the 4 of us saying the lines. Every piece of art should be about people and have people at the very centre. In our case, that centre is being part of the experience. Deliberately.
Also it's Xenophobic.

I also object to this line.

'We were greeted at the entrance to the Red Queen by a man in a frockcoat, vest and Y-fronts. Yes, alarm bells rang. His cohorts were also wearing Y-fronts, even the girl, except for the man who had enough decorum to be sporting a full set of long johns.'

Because it's sexist.
Even The Girl. A Man. And even The Girl. Imagine - a girl in Y-Fronts. Not even a fully grown 27 year old woman who's a professional actor. Nope, The Girl. In Y-Fronts. In 2016. Whatever next? You never know, maybe next we might all start seeing gender as a spectrum and work on normalising our outmoded patriarchal binary opinions of Girls and Men.

A Man is Dominic Allen and The Girl is Holly Beasley-Garrigan. Dom plays Johnstone and Holly plays Jonson (soft J). Their names and characters are on the press release.

The rest of the review I don't mind. They didn't like the show and that is okay. We got a glorious 5* review on the same day and we'd far rather divide opinion that be beige. The 5* review is nice - not just because it's 5* but because it actively draws a social and political parallel with the very recent cabinet shuffle in the Australian Government. We couldn't have planned for that. But that's one of the best things about art.

But we have spent years getting to this point. A point where we can create 3 shows in the UK to transfer to the other side of the world. That is no small undertaking as every international company will tell you at this festival. It's expensive and tiring and busy - but is exhilarating and gorgeous and welcoming and fulfilling. And, yes, on our day off we did go to the beach.

I would hate to think that anyone who reads Tony Busch's reviews will carry his prejudices - either about us Brits or about interactive theatre. We come here because Adelaide Fringe is a damn good festival and because it helps us make more work in the Southern Hemisphere. That's hard to do if we never leave North Yorkshire. We work damn hard. It's hot in Adelaide and it's winter in the UK. But I don't think us Brits should be blamed for the world's various climates and Adelaide's proximity to the sea.

If you would like to come see what we're up to have a look here - we'll hold our hands up to all and any debate, we ain't squeamish - and drop us a line, good or bad, on @FlanCol. And if you want to come to the beach with us on Monday, we'll be trying to play volleyball and getting sun burnt. We'll even have a beer with Tony Busch if he wants one.

Support the Adelaide Fringe, make friends, swim in the sea, imagine and create - because life is too short not to. Keep on rocking in the free world.

Posted by The Flanagan Collective at 21:56 No comments: